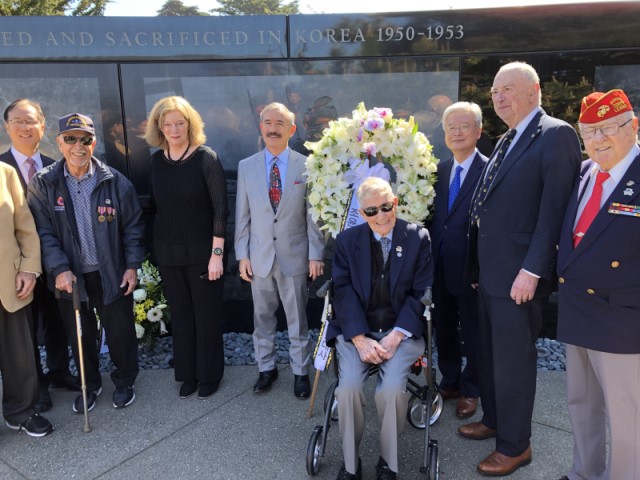 The two senior diplomats were on a multi-city “Ambassadors’ Dialogue” tour across the country, a program hosted since 1992 by the Washington, DC-based Korean Economic Institute (KEI) to provide an opportunity for the two nations’ ambassadors to get to know each other, build rapport, and strengthen the strategic alliance between the United States and the Republic of Korea. The ambassadors were accompanied by their spouses, as well as by Kathleen Stephens, President and CEO of KEI, and former U.S. Ambassador to the Republic of Korea from 2008 to 2011. The visit allowed Ambassador Stephens to renew her acquaintance with the KWMF officers, whom she had met when she spoke at the Opening Ceremony of the Memorial on August 1, 2016.

Judge Quentin L. Kopp (Ret.), KWMF President and Chairman, welcomed the two ambassadors, each of whom then addressed the gathering and expressed their gratitude and respect for those who served in the Korean War.

After the remarks, Ambassadors Harris and Cho placed a commemorative wreath at the Memorial wall.

The laying of the wreath concluded the formal part of the ceremony The dignitaries from Washington then conversed informally with their local hosts, renewing old friendships and beginning new ones.

Ambassador Harris shared a laugh with KWMF’s Donald Reid, Sgt, USMC, a Korean War veteran of the Punchbowl and other major battles. Standing with them is Jan Huly, Lieutenant General, USMC (Ret.), President & CEO of the Marines’ Memorial Association and Foundation in San Francisco. General Huly came to the event to see his long-time friend, Ambassador Harris. The two men served together when they were on active duty at the Pentagon, and have maintained their friendship since that time.

From San Francisco, the ambassadors’ delegation flew to Colorado, the last stop on their nationwide tour before returning to Washington, DC. KWMF was honored that these dedicated diplomats took the time to visit the Korean War Memorial in San Francisco.