In 2009, the Korean War Memorial Foundation (KWMF), a 501(c)(3) non-profit organization, undertook the mission to design and build a Korean War Memorial in San Francisco, in order to commemorate the sacrifices made by all those who fought in the so-called “Forgotten War,” educate future generations about those sacrifices, and ensure that those generations never forget the true cost of war and the true price of freedom. That primary mission was accomplished on August 1, 2016, when the completed Memorial was officially opened to the public.

The San Francisco Bay Area was chosen for the Memorial site because it was the embarkation point for so many who went off to fight in that long-ago, faraway war, and the end of the journey for so many who returned, the living and the dead. 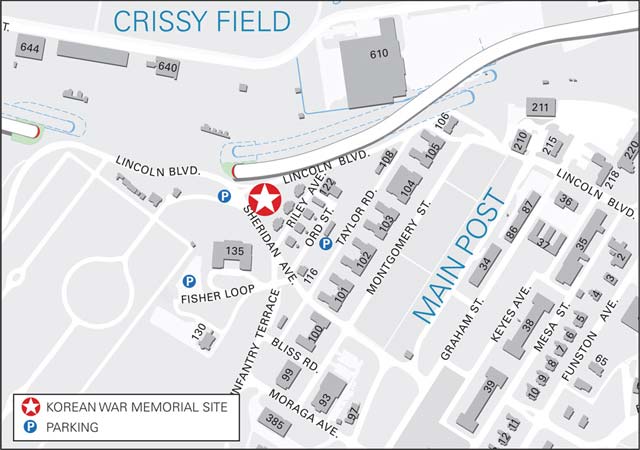 The Memorial stands in a prominent place in the Presidio adjacent to the San Francisco National Cemetery. It faces west with a breathtaking view of the Golden Gate Bridge and the Pacific, and beyond toward the now prosperous and democratic Republic of Korea. 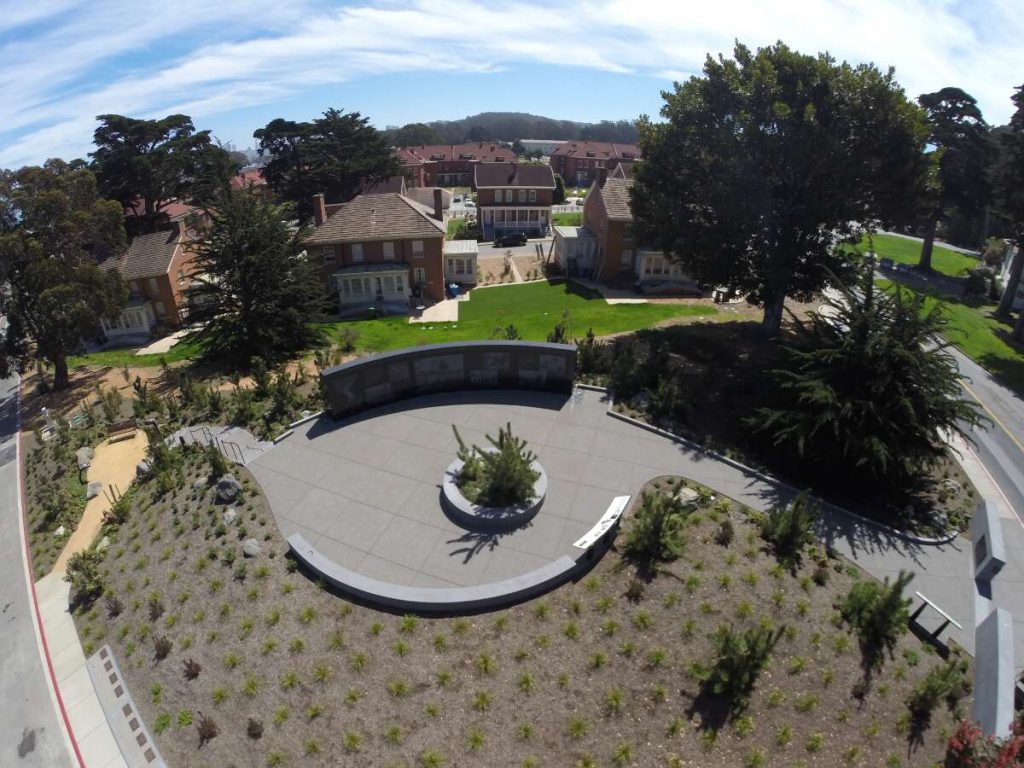 An aerial view of the Memorial. On the right is the Sheridan Avenue entrance. In the center is the main Memorial wall and the circular planter. And in the lower left corner are the commemorative tiles and plaques.

The Memorial is at the corner of Lincoln Boulevard and Sheridan Avenue. Two stone walls flank the main entrance on Sheridan. On the inner side of these walls is an inscribed black granite panel acknowledging the generosity of the major donors. A nearby interpretive panel provides details on the geopolitical circumstances that led up to the Korean War. The visitor then enters the main Memorial Plaza, a large oval space framed by a backdrop of trees, hedges, and flowering plants. On the right, facing west toward Korea, is a long, gently curving wall, approximately ten feet high, made of polished black granite. The wall consists of a series of panels laser-etched with iconic images from the war and descriptive text.

In the center of the plaza is a circular bench enclosing a planter. The planter contains several young Korean pine trees surrounded by stones from key battle sites of the war, each identified by a small metal plaque. 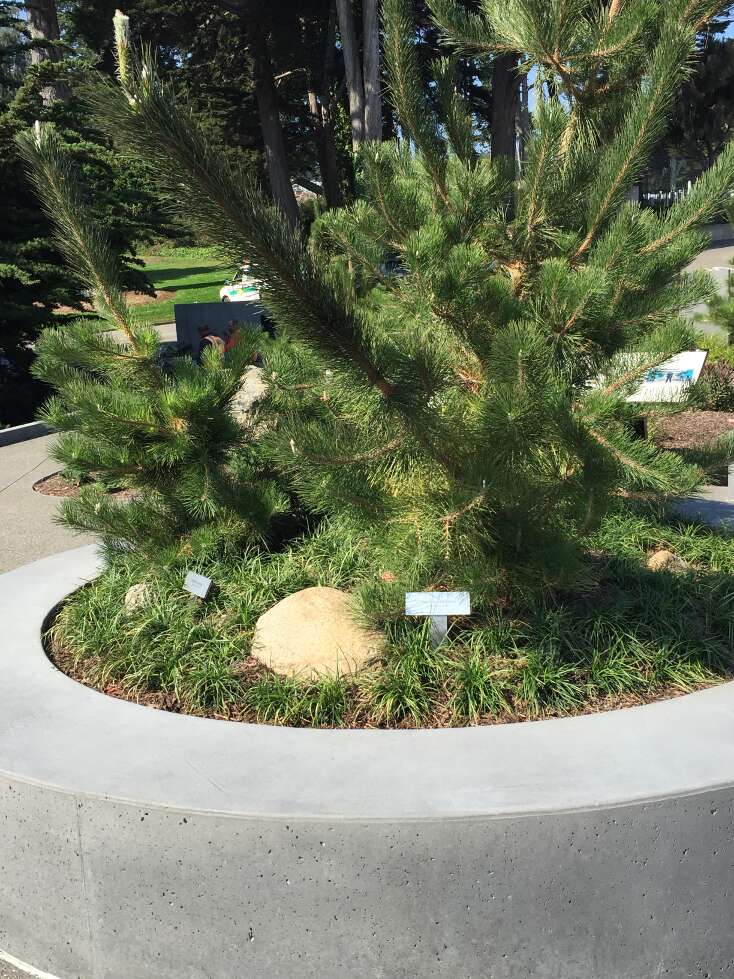 The circular planter with Korean pines and battle stones 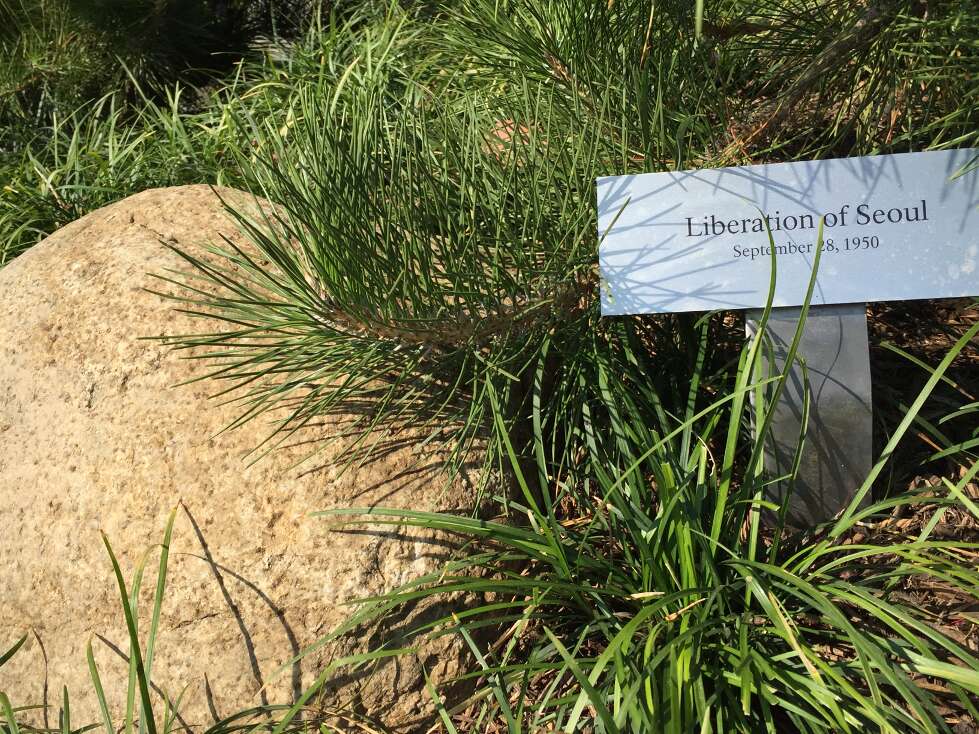 The Liberation of Seoul stone

To the left of this planter is another interpretive panel describing in words, photos, and maps the major developments of the war, the armistice, and the results. 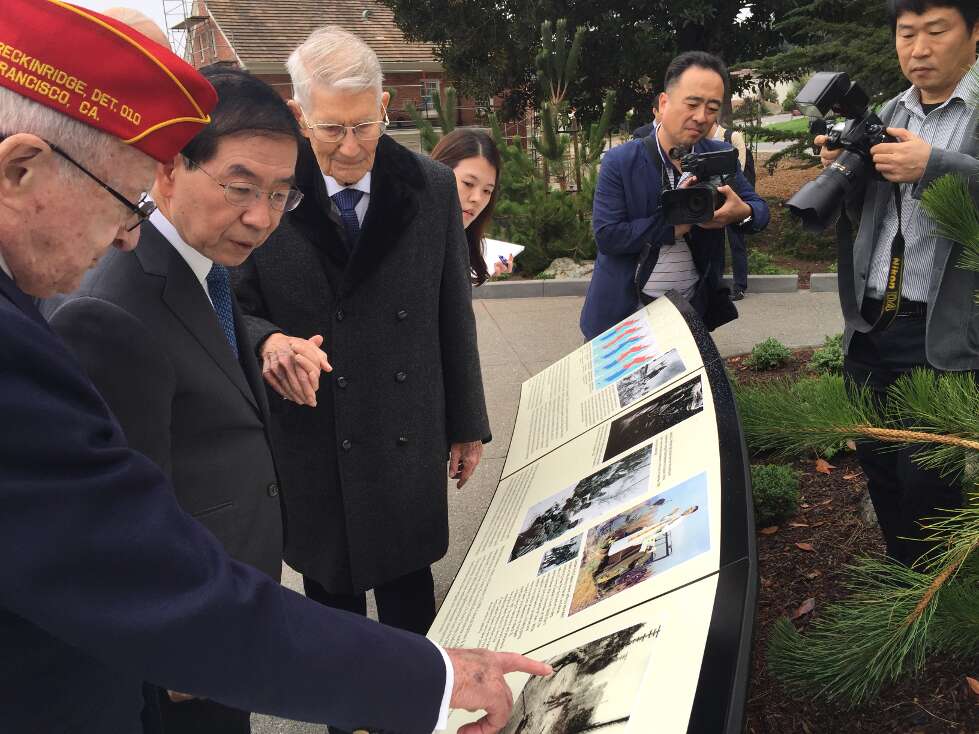 Seoul Mayor Park Won Soon studies an interpretive panel during a September 10, 2016 visit to the Memorial. On the left is KWMF Treasurer Don Reid, and on the right, KWMF 2nd Vice President John Stevens.

At the far end of the plaza, a stairway leads down to a smaller, more intimate area within the Memorial. Nearby benches allow for rest, remembrance, and reflection. Adjacent to this area, facing Lincoln Boulevard, is a series of commemorative panels. Here is where the individual donors – Korean War veterans, their families and survivors, and other supporters – are recognized on more than six hundred inscribed tiles and plaques commemorating those who served and sacrificed. 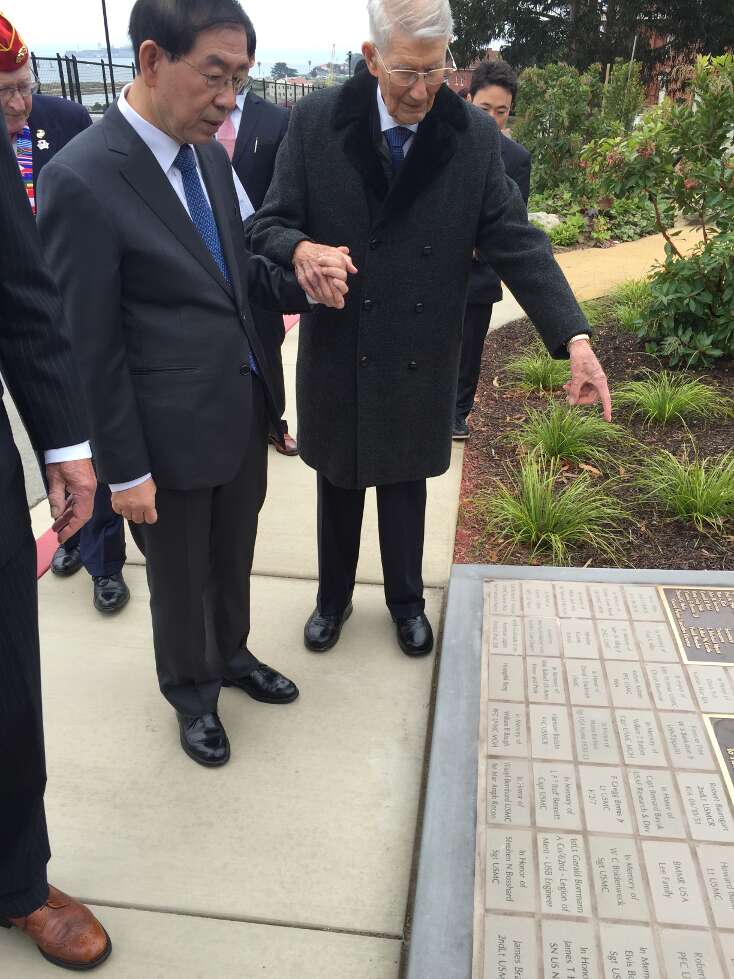 Now that the Memorial is open, the Korean War Memorial Foundation is concentrating on a continuing education program, in cooperation with the San Francisco Unified School District and other agencies, to ensure that future generations remember the Korean War and those who sacrificed to defend democracy and protect South Korea’s freedom.